So the NCAA Tournament was pure madness, but I was glad to at least see a competitive final game.  Kansas and Kentucky getting knocked out early busted pretty much everyone’s brackets (specifically those who know anything about college basketball), which allowed everyone else to rise to the top.  I’m not bitter.  And in a surprising turn of events, the winner of the NCAA Tournament challenge was none other than…my wife!  (She likes to rub it in that she has beaten me multiple times in the tournament challenge)  The secret behind her winning bracket?  She picks teams based on her interest in their law school…which in turn had her picking Duke to take the whole thing.  SERIOUSLY??!?!  Whatever the case may be, she dominated my picks and took home the prize.  Well…not actually taking it home.  She’s the winner of the 16×24 canvas, and she’s taking it to her office in the city.  Here’s the print that she selected:

Big ups to Shawn Abraham, Jason Abraham, Giby GeeVarghese, and Joel Philip for rounding out the top5.  (For the record, I finished in 16…out of 39…at least I was in the top half :/ )

In other news, I used to do a “Monday Night Recap”, and generally around this time you would basically get an update on the woes of being a Cubs fan.  Well the new season is here, and I enter in with just as much hope as I did in the early 90’s when I first became a fan.  I’m probably setting myself up for great disappointment, but ah well…such is the life of a Cubs fan.  We’ve had a rough start to the season, but its obviously early, and a win today will bring us to .500!  Woo hoo! :)

Yesterday was the home opener for the Cubbies, and although I didn’t have tickets to the game, I decided to swing by Wrigley Field before the start of the game to see what the crowds were like.  And just as I suspected, the true-blue were out in full force, with just as much hope as I have for the year.  I left just before the end of the 1st inning, though I probably should have stayed longer as the ball was flying out of the park early.  Congrats to my Cubbies for pulling off the much needed 9-5 win against the Brewers, hopefully this ‘undefeated-at-home’ streak lasts for awhile.  Here’s a glimpse around the ball park before the pre-game.  (If anyone has connections to get me closer to the action, hook a brother up! :))

The CTA was filled to the brim with Cubbie blue! 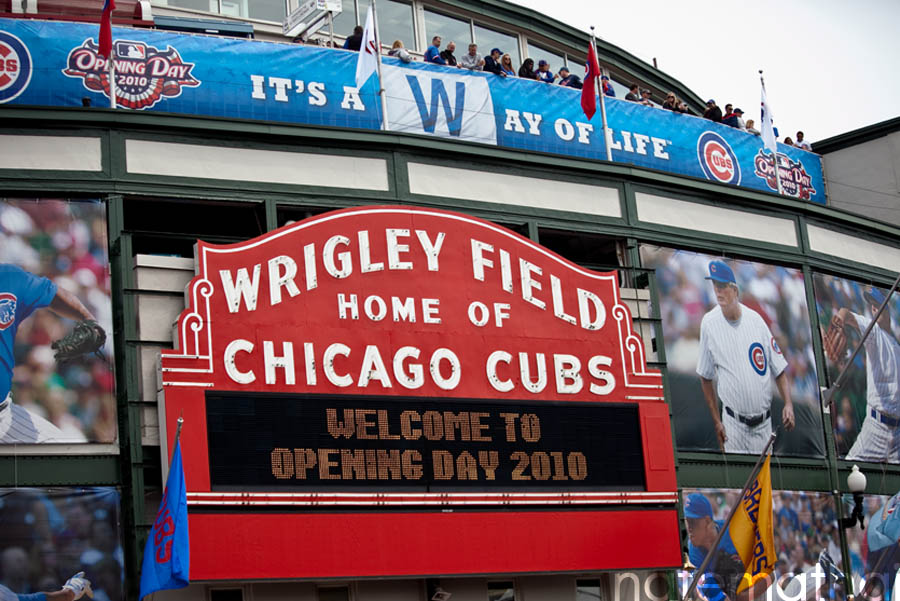 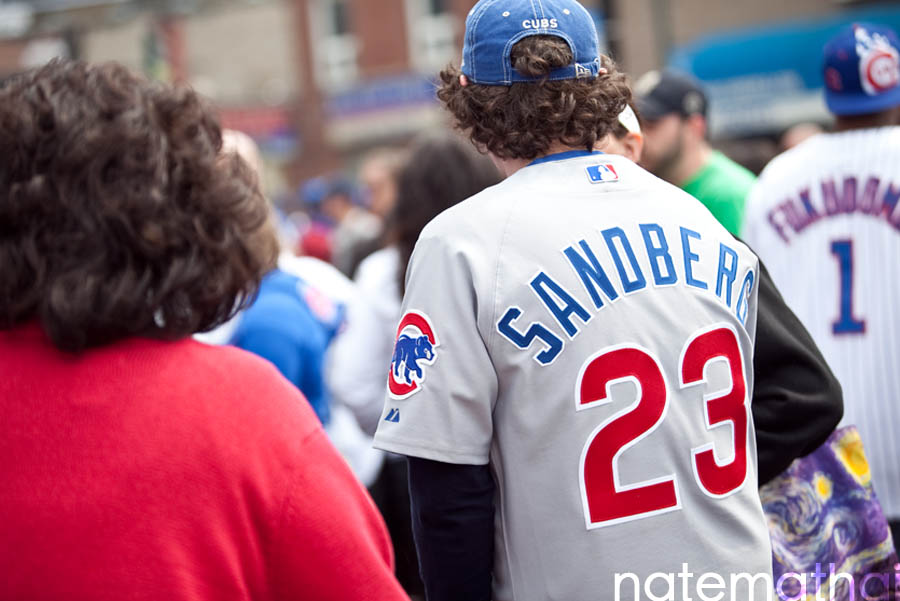 I think this guy works for FOX?  Anyone know his name? 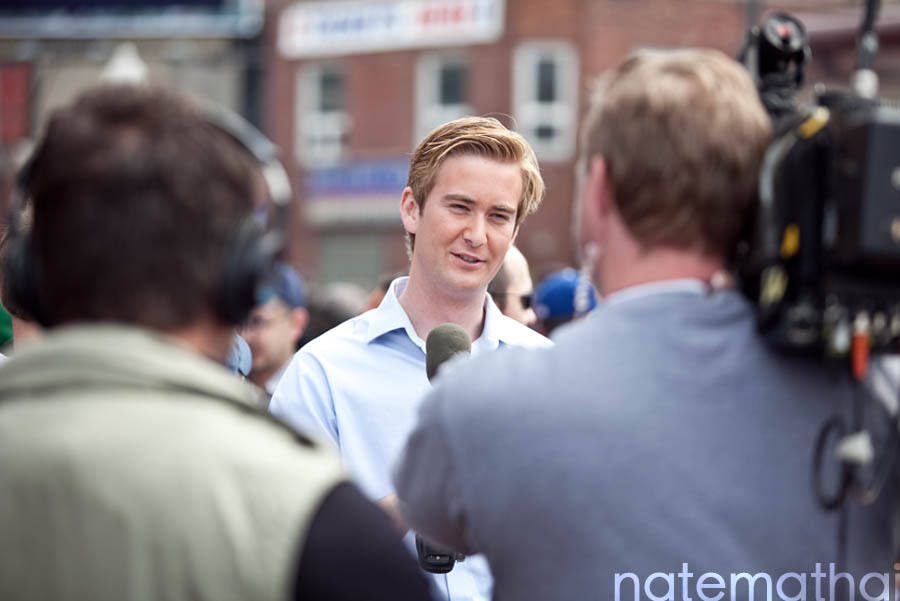 Some questioned…how did he get those to stick? I questioned: what made him even think about doing that!? 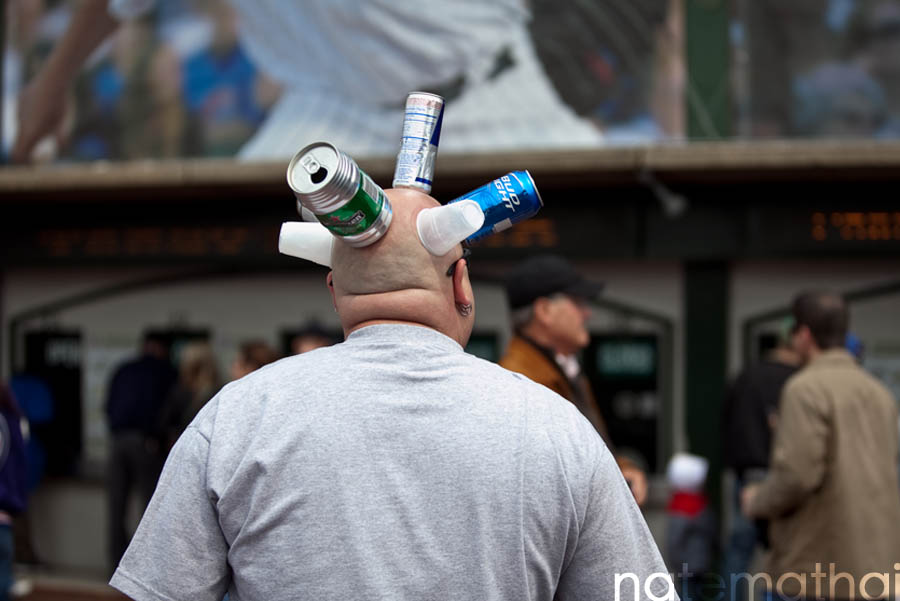 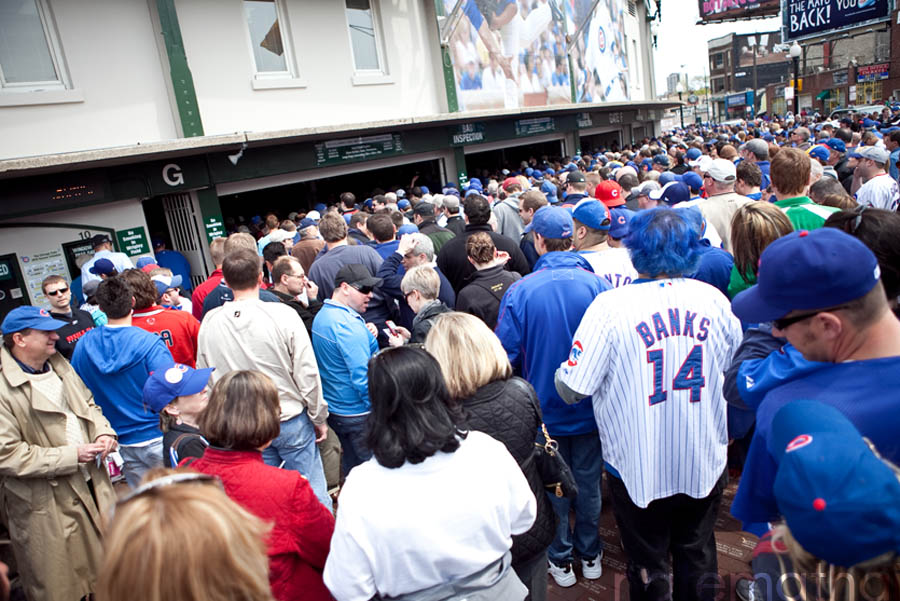 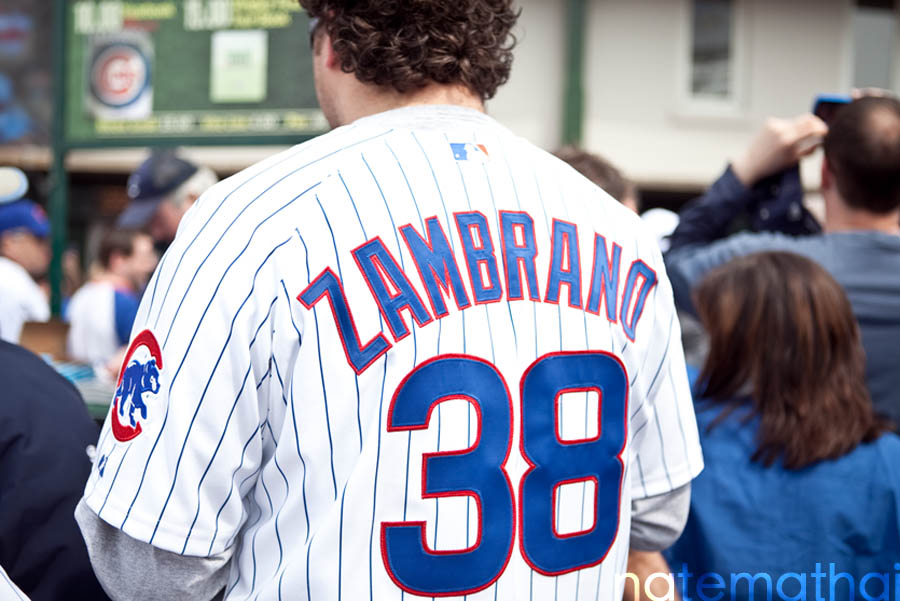 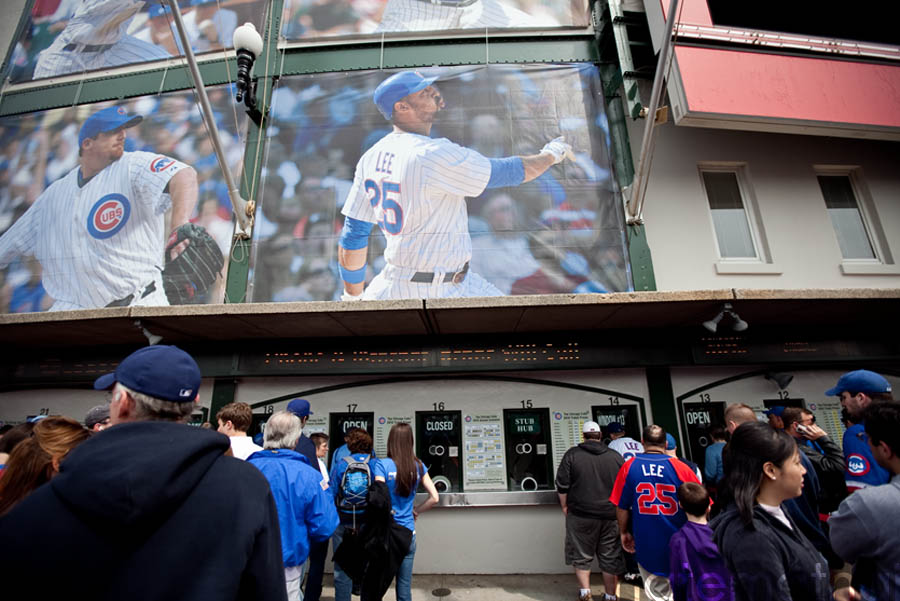 This was the line to get to the rooftops! Anyone ever been up there? The view must be amazing… 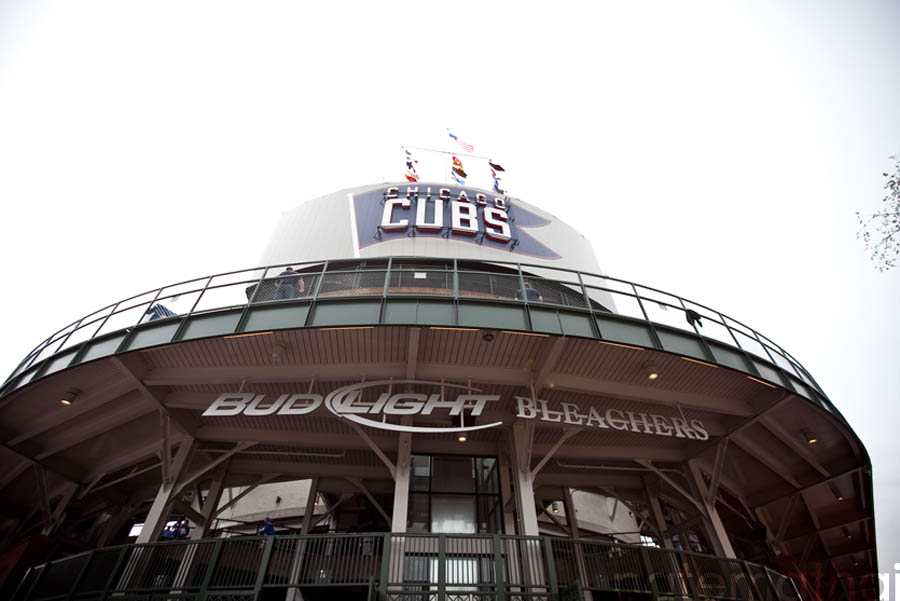 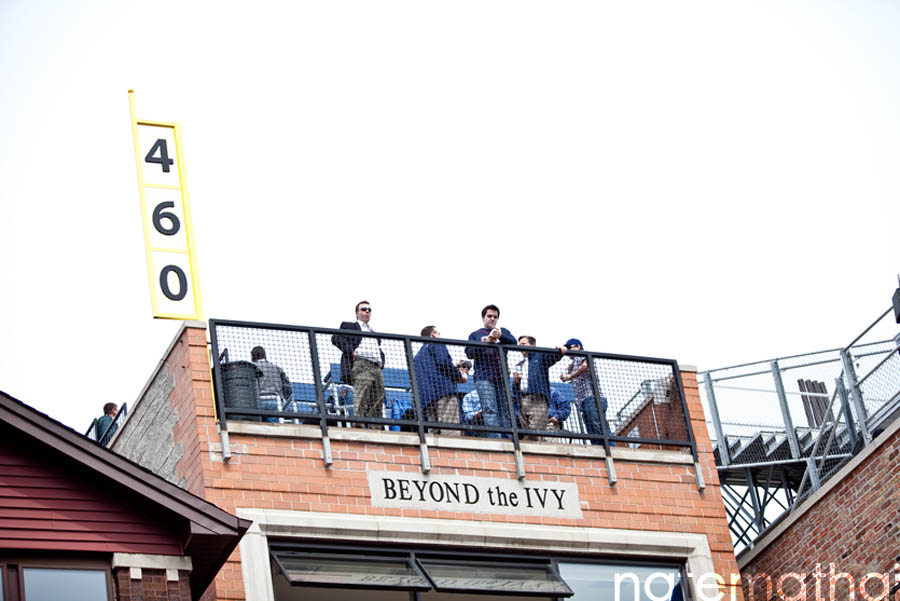 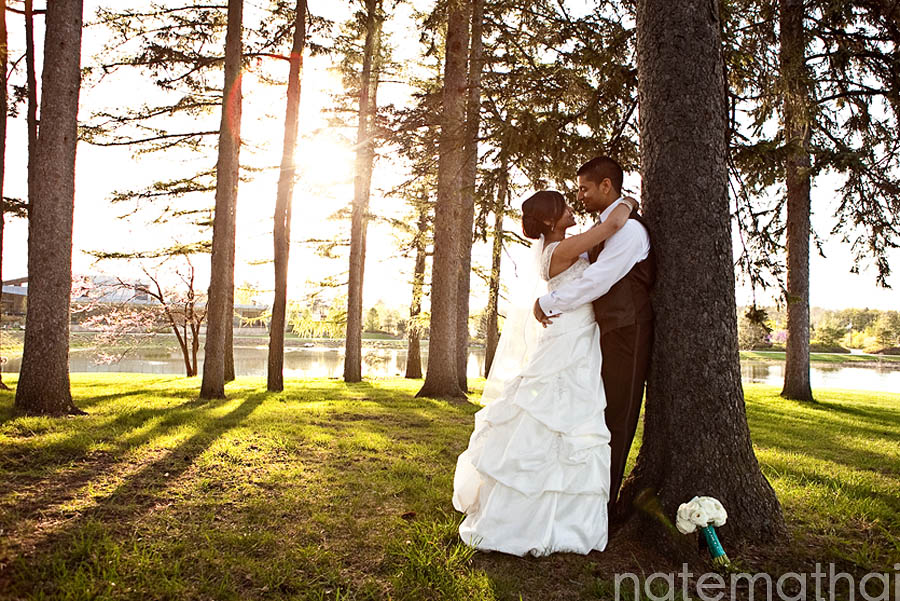